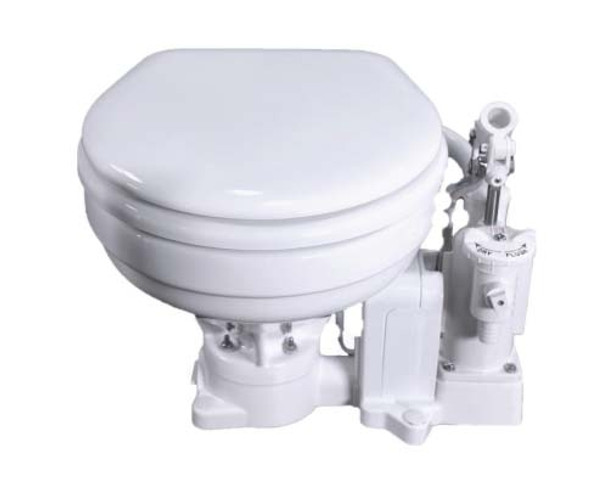 The design of the piston pump dates to the 1950’s when the first PH was developed for the Navy. Many improvements over the years have made Raritan’s PHII the most recognized and popular among those who demand the best. While the PH Powerflush does not have the familiar PHII in the name it utilizes the PHIIPUMP on a new base and a fully redesigned electric gear box.

The advantage of the PH series over competitive units is that the piston housing is much larger allowing not only for easier flushing if being flushed manually but also for more efficient flushing as the pump is able to move more water in and out of the bowl. A full-size joker valve on the outflow means less probability of clogging when flushed as well. A common problem with piston type toilets is that sometimes water builds up in the bowl so Raritan add an air valve that allows the user to turn off incoming water and the user can continue flushing or pumping without building up pressure in the pump.

This toilet provides the best of both worlds for the person desiring electric operation but the peace of mind of manual backup.

PH Powerflush was designed to provide a unique option not available in any other marine toilet. Most toilets are either manual operation or electric macerating toilets. The Powerflush does not macerate but does offer the best of both worlds for those needing the option to switch to manual operation. The PH pump used on the PH Powerflush is a design that is timeless.

This pump was originally designed in the 1960’s for the U.S. Navy and while it is no longer built of bronze it has undergone some improvements over the years but the basic function remains the same. The dual action pump is 66% larger in diameter than any competitive market. Because the housing is larger it more easily moves more water in and out of the bowl meaning you spend less time pumping and more time enjoying your time on the water.

If water usage is a concern the intake water can easily be turned off and the unit can still be pumped to allow flushing with virtually no water being used. When installed as a Powerflush the simple push of a button activates the motor and arm that moves the piston up and down to flush the toilet. Should you lose power or need to conserve power the toilet converts easily to manual operation by removing the pin and inserting a handle into the pump.

A newly designed base enables this unique manual/electric toilet to easily install in installations where the builder has chosen only a mass produced manual toilet.

In addition to the larger housing the pump also boasts a full size joker valve which helps to prevent clogs and improves the flushing action. A lever handle rather than a T-grip allows all users to flush the toilet with incredible ease! It is during pumping that you realize how much difference the larger pump housing makes! Only a few pumps of the handle and the toilet is flushed. Smaller housing means many up and down pumps of the handle to move only a little bit of water.

The air vent added on in the 1980’s allows the user to close the intake water while still pumping and prevents pressure build-up. Being able to flush the toilet without adding water has many benefits including the ability to empty out the bowl while in heavy seas. Each unit comes with a slow close seat that include stops on the underside of the seat to help prevent the seat from shifting while in use in heavy seas.

The PH Powerflush offers the normal small marine size bowl but also has models with a bit more seating area considered our household size bowl. Water must be drawn in from the outside or can be used with fresh water if you have a dedicated tank for pulling freshwater in. for those wishing to use onboard pressurized freshwater we recommend the Fresh Head. The Powerflush handle has been updated to telescopic allowing for more leverage when flushing for the youngest of users or to neatly tuck away especially in head areas with extremely limited space. 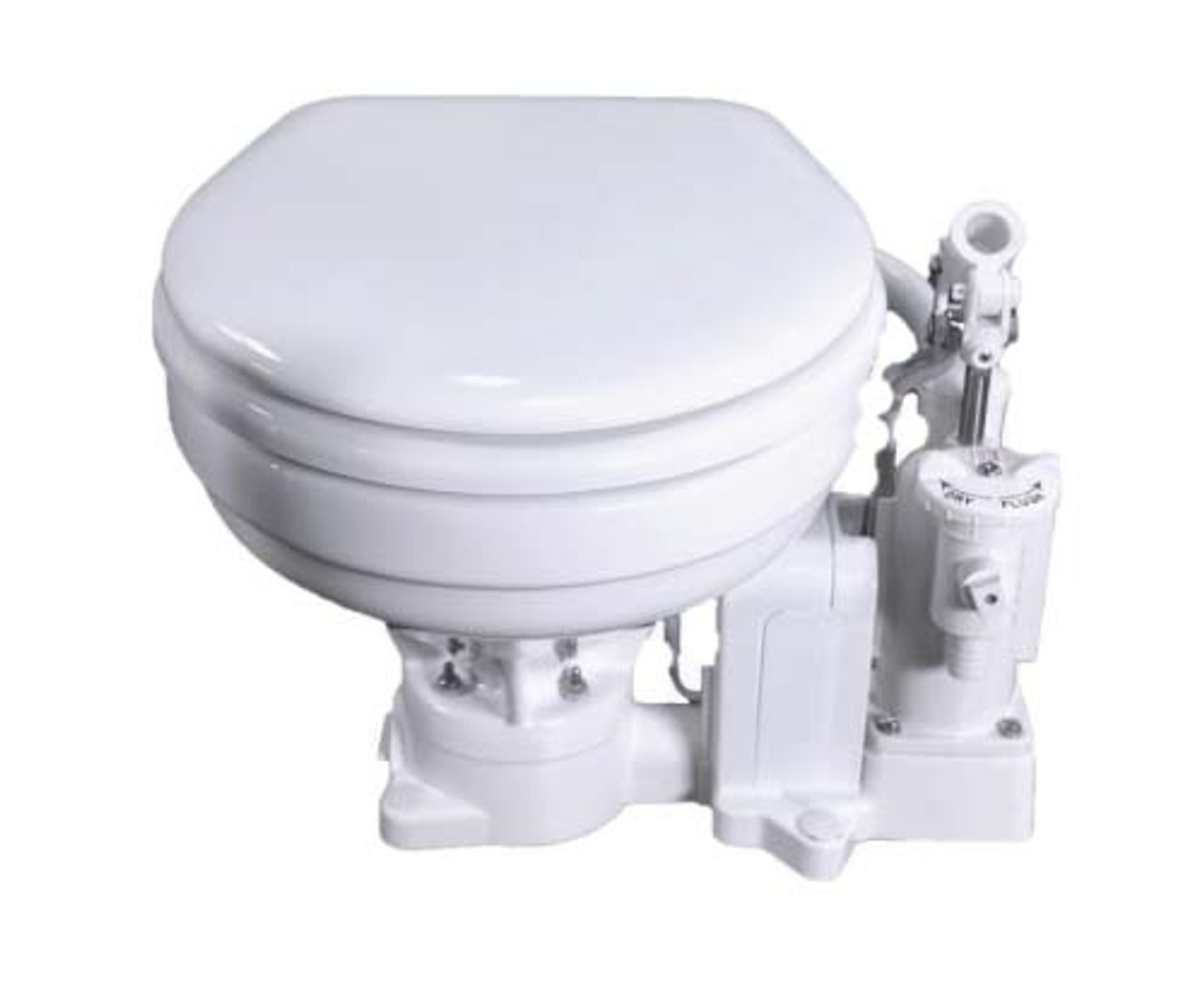