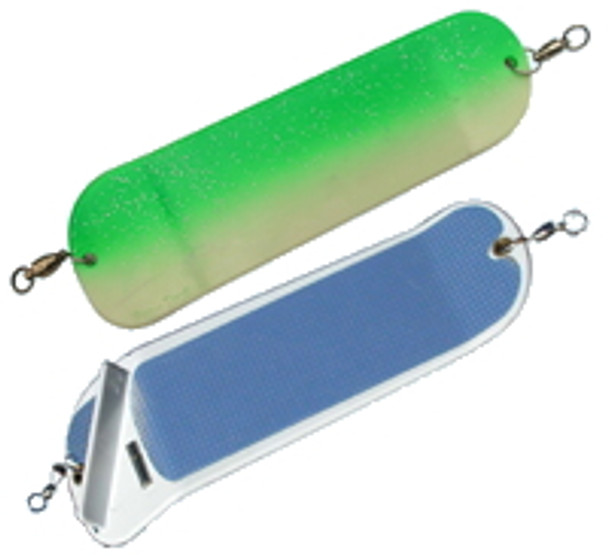 The ProChip 8 Flasher is an eight inch flasher with a diagonal kicker fin on the back which give the flasher a more erratic kicking action particularly at slow speeds. It can be run as slow as 1 MPH with outstanding action. It has a minimum drag when a fish is hooked. It includes the EChip for "live bait" nerve pulses. This flasher is rapidly growing in popularity. It is very popular in the Great Lakes where it is used with a salmon fly 22 to 24 inches behind the flasher. More salmon are caught on flashers than by any other fishing technique. The vibration of the flasher duplicates the tail movement of a salmon charging a school of baitfish. Salmon detect this vibration in their lateral line up to 50 feet away and will charge in hopes of finding baitfish.

The action of the ProChip 8 flashers is amazing. It spins in an erratic circle while kicking from side to side at the same time. It gives great action to a bait or hoochie behind it. The use of this flasher is slowly displacing a lot of eleven inch flashers. It is easy to handle and can be coupled on short leaders (some fishermen use as short as 30 inches front and back). It also has much less drag than an 11 inch flasher.

The ProChip 8 and ProChip 11 flashers may represent the most significant flasher development in decades. The spin and kick design combined with the EChip is outfishing everything on the market. This flasher has been endorsed by nearly every Charter Captain or Professional fisherman that has tried it. It is also a consistent derby winner.

They have several rigging advantages. (1) They can be fished very effectively with a variety of setups including downriggers, 2 or 3 lb. drop sinkers, dipsey divers or other planers. (2) The front leader length can be as short as 4 feet and still get an effective tail kick which attracts salmon and gives lots of action to the bait, hootchie or fly at the back. (3) It can be trolled as slow as 1 MPH and still provide a strong tail kick. This is a big advantage when fishing for mature salmon that will not hit a fast moving bait or lure. Conventional flashers must be trolled at 2 MPH or more to get a good tail kick.

NOTE: The fin is at the back end of the flasher

​The same type setup can be used with a drop sinker, a dipsey diver or a planer:

Captain Pete Lahosky runs the Prime Time Fishing Team on Lake Ontario. He has won almost every major salmon derby on the Lake including the prestigious Challenge Cup. He has fished the ProChip 8 as his primary flasher for the last two seasons. One of his favorite setups is running the ProChip 8 eight feet behind a wire line dipsey diver. He runs a white and pearl fly 22 inches behind the flasher. His comments were, "The ProChip 8 just seemed to call kings to it. This rig outfished similar set-ups with everything else the same but the flasher by a 2:1 margin."

And on the West Coast:

Captain Barry Canevaro Charters for salmon on the Pacific Ocean outside the San Francisco Golden Gate. He is recognized as one of the top salmon producers in Northern California. He runs the ProChip 8 in two different setups. Early in the season when the salmon are actively feeding he will run the flasher on a downrigger. He runs it 25 feet behind the downrigger cable with either a Pro-Troll Roto Chip bait holder rigged with an anchovy or a hootchie. He uses a tail leader length of 36 inches. Late in the season when the large spawners congregate outside the Golden Gate, he changes to a 1 1/2 lb. drop sinker 30 inches in front of the flasher. He uses a 30 inch tail leader with an anchovy in the Roto Chip. With this setup he will troll as slow as 1 MPH. His comments are, "I have never seen any flasher catch fish like the ProChip 8. My preferred color is the glow in the dark white. For the last two months of the season it caught more fish everyday than any other setup on my boat. One of the reasons I feel it is so effective is that I can drop my trolling speed to as slow and 1 MPH and still get good flasher action. This gets the 30 to 40 lb. spawners that will not hit a fast trolled bait late in the season". 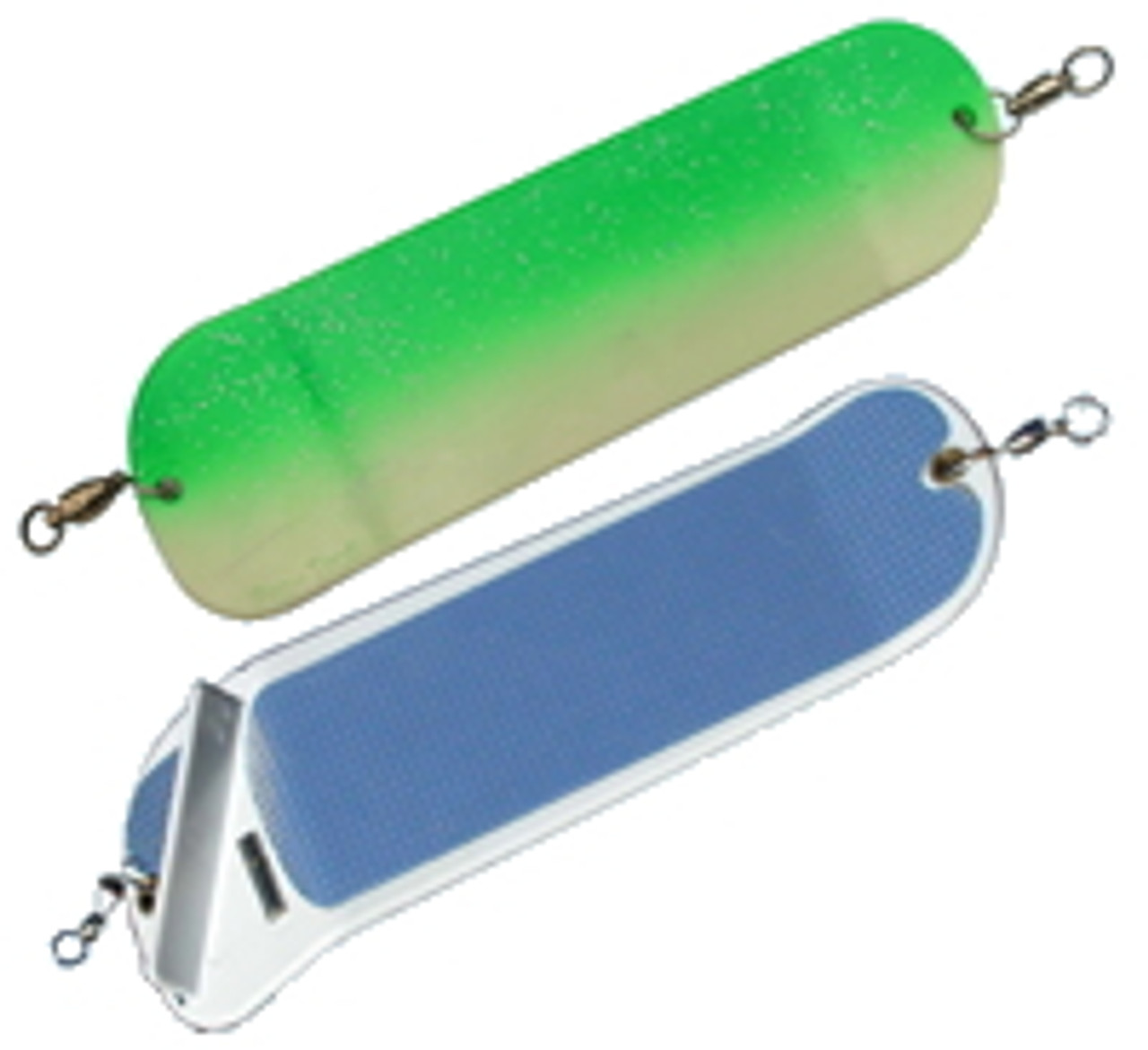 MSRP:
$11.39 - $12.79
A staple of the commercial fishing industry for decades, Hotchip 8 Flashers are 8" flashers are made of ABS plastic which is more brilliant in color and will not warp in the sun. Hot Chip Flashers...
Options Quick view

MSRP:
$20.09 - $20.69
The ProChip 11 flasher is a top salmon producer in this flasher series. It is 11 inches long and has a diagonal kicker fin on the back side. The kicker fin causes the flasher to kick and spin much...
Options Quick view

MSRP:
$23.69 - $24.59
This is the latest high-tech Pro-Troll development. You will be amazed with the flashing light results! Following three years of testing and development, Pro-Troll has developed a lighted...
Options Quick view

MSRP:
$11.99 - $16.99
The Hotchip 11 Flashers are the traditional 11 inch flashers that have been used for decades.  They are a mainstay of the commercial salmon fishing industry.  Pro-Troll Hotchip...
Options Quick view

MSRP:
$25.49 - $25.59
This is the latest high-tech Pro-Troll development. You will be amazed with the flashing light results! Following three years of testing and development, Pro-Troll has developed a lighted...
Options Quick view

MSRP:
$9.69 - $10.49
The ProChip 4 flashers are made for catching trout and kokanee. The flasher is 4 inches long and has a diagonal kicker fin on the back. This gives the flasher an eratic spinning and kicking action...
Options Quick view

MSRP:
$2.99 - $3.49
Add a special color or pattern to your favorite 8" or 11" flashers to enhance them and make them more attractive to fish. Customize them further with tape and eyes!
Options Quick view

MSRP:
$18.29
This is the latest high-tech Pro-Troll development. You will be amazed with the flashing light results! Following three years of testing and development, Pro-Troll has developed a lighted flasher...
Options Quick view