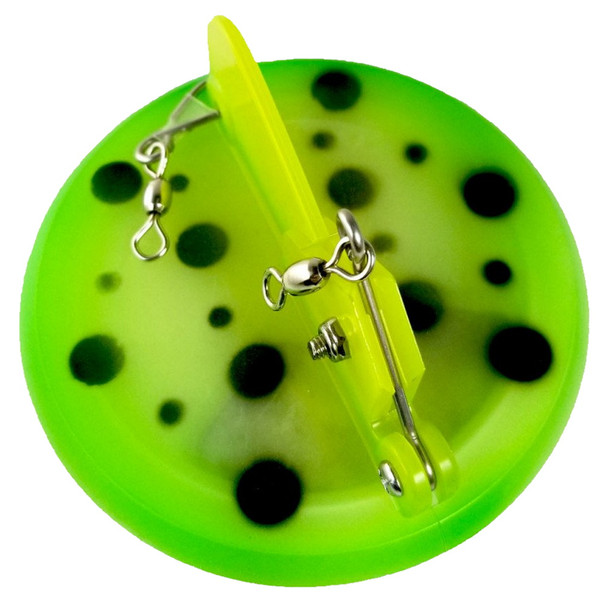 Dreamweaver has the Deeper Diver. This family of divers have heavy-duty hardware and locking mechanisms. The directional adjustment works with a locking system that will not unlock and change depth or direction. The Deeper Divers also match all current diver charts.

Dreamweaver Divers dig into the fish zone and stay there, making them the most versatile tools on your boat for delivering lures to fish when trolling.

No-Ring design – Dreamweaver Divers eliminate the hassle of the add-on plastic rings, which pop-off and wear-out over time, found on competitive divers to make them dive deeper.
Dial-a-Direction - Dreamweaver Divers use the water's resistance to dive. The Dial-a-Direction weight on the underside of the Diver lets you adjust the dive direction - port or starboard; or set the weight right in the middle to dive directly behind the boat.
Releases upon strike - When a fish hits, the release arm trips, so you fight the fish and not the diver.
Several color patterns - allow you to choose from fish attracting finishes, or stealth colors like black and clear. Dreamweaver Divers deliver your lure down to where big fish lurk!

Rigging
For rigging the Deeper Diver, tie your main line to the front of the diver at the swivel attached to the end of the wire release arm. Then tie a segment of line with a leader length between 2-6 feet. On one end of the leader you tie your lure, the other end is tied to the swivel located at the back of the diver. It is recommended that the leader be no longer than the length of the fishing rod as you need to be able to reach the fish when landing it.

Setting the diver for depths and directing out to the side of the boat
To adjust the depth setting/plane angle turn the weighted keel dial on the bottom of the Deeper Diver to the left (port) or the right (starboard) to select the side of the boat you want it to dive and the setting for the desired depth. The Deeper Diver allows you to pick the depth and direction you want it to dive giving you the ability to get your lure away from the boat to ad more fishing rods, cover a wider area and different depths. The depth setting/plane angle is measured in a sequence of numbers starting at "0" and out to "3" on the left (port) or right (starboard) sides of the boat. The 0 setting will cause the diver to angle straight down and not out to either side of the boat. As the numbers increase from 1-2-3 the diver takes a greater angle and the diver pulls out to from the side of the boat. 3 setting being the furthest out to the side in either left or right direction, based on left or right on the depth setting of the weighted keel dial. With the same amount of line used, a 0 setting will gain the greatest depth but without pulling out to the side and conversely a 3 setting will give the least amount of depth with the furthest side tracking.

Depth charts are suggested depths for each size diver with prescribed amount of line let out and the line lbs test (line diameter influence). Note that trolling speed and underwater currents vary the achievable depth. Line diameter and line types also can vary the achievable depth. It is best to use the available depth charts as a guide to get you started and if you happen to touch bottom, remember the amount of line you let out, the type of line you are using and the trolling speed so you know where your bait is at those circumstances. Simply pull in more line to reduce the diver's depth or let more line out when gaining more diver depth.

Letting out the diver and start fishing
To ready the diver to go in the water, push the release arm into the pinch mechanism to hold the release arm upright and allow the diver to angle downward into the water. With the boat moving slowly at trolling speed, slowly allow the diver to dip in the water and hold the diver in place to observe that it is able to plane down and out in the desired direction. With constant tension (do not free spool the line when letting the diver out as the diver may loose it's plane attitude and spin downward at a freefall), let the diver out slowly so that it not only dives, but planes out to the side as you let out line from the reel. A line counter reel will help you determine the amount of line you are letting out to the diver. When you catch a fish, simply reset the diver and let out the same length of line.

MSRP:
Now: $10.99 - $13.59
Was:
Dreamweaver TripZ Diver Catch salmon, trout, or walleye down deep with the DreamWeaver TripZ Diver, a classic trolling aid that puts your lure right in the strike zone. No need for a downrigger or...

MSRP:
Now: $9.49
Was:
Bay Rat Lures Long Shallow Divers offer a unique design made by anglers for anglers. The minnow-like appearance and fish-enticing wobbling action of these lures will bring on the strikes. Bay Rat...

MSRP:
Now: $9.49
Was:
Bay Rat Lures Long Deep Divers feature a minnow-like appearance and fish-enticing wobbling action that is sure to bring on the strikes. These lures present a unique design made by anglers for anglers...

MSRP:
Now: $10.99 - $13.59
Was:
Dreamweaver TripZ Diver Catch salmon, trout, or walleye down deep with the DreamWeaver TripZ Diver, a classic trolling aid that puts your lure right in the strike zone. No need for a downrigger or...

MSRP: $13.99
Now: $13.89
Was:
The ProChip 8 ranks in the top of all flashers in catching salmon. It is an eight inch flasher with a diagonal kicker fin on the rear of the back. This gives it an erratic kicking and spinning action...

MSRP:
Now: $79.99
Was:
FISH307.com Downrigger Trolling Rods These graphite custom trolling rods from FISH307 are made to our own specifications. These rods are lightweight with a specialized taper to them for a sensitive...

MSRP:
Now: $17.99 - $18.49
Was:
Like other disk style divers, the Slide Diver, The Adustable Trolling Diver, utilizes water pressure against the planing surface which forces the unit to dive when trolling. The adjustable weight...

MSRP:
Now: $11.89 - $46.79
Was:
The AFW Planer is an innovative and precisely balanced piece of fishing of gear. A lead weight acts as a keel and balance to keep the planer running straight at controlled depths. When the planer is...

MSRP:
Now: $10.99 - $11.49
Was:
A staple of the commercial fishing industry for decades, Hotchip 8 Flashers are 8" flashers are made of ABS plastic which is more brilliant in color and will not warp in the sun. Hot Chip Flashers...

MSRP:
Now: $94.95
Was:
Ugly just got tougher! Defined by toughness and dependability, the Bigwater series features an all-new look including Ugly Tuff™ guides that provide maximum corrosion resistance and the Ugly...